A collaboration between Julie Groves and poet Andy Spragg as Between Soundings.

To mark the release of Andrew Spragg’s Notes for Fatty Cakes (published by Anything Anymore Anywhere) Between Soundings created a performance event which took place at The Poetry Café in London in October 2011.

Julie created a soundscape to accompany Andy’s live performance of the text, utilising ambient recordings and immediate sound. The sparking of these pre-formed events was facilitated expertly by Matt Cockshutt on Ableton live. Visit Andy at brokenloop.blogspot and Matt at yellotone .

This following excerpt of Notes for Fatty Cakes accompanied the event. Please visit anythinganymoreanywhere to purchase the entire text:

Thanks to Natalie Orme of NODraws for the artwork 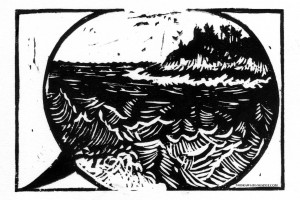 In lieu of having anything to say of FC & I – a secret, early note:

but our narrator was insensible to its passing.

for a crime of unkn. org.

of order to a close.

the Judge parks a unitary behind

and casts all reasonable doubt from the mind.

The gobbling appeals for justice

“bound over or be sated,

at least shine through.”

was that the instruction came:

“That bad heart: let it perpetuate no longer.”

as statements went it chuckled

as a wise man once decreed.)

once freed from the shadow of the court-house Captain Cakes stripped wig and gown,
pushed lips to lips and consented that it were a jape, such a thing. We were all in
cahoots, puzzlement upon the brow (the metaphoric swelling bosom upon which sleep
abounded now swelled synchronised and thrilled), set course for the sunset.

To & Fro so the cabin goes

To & Fro so the cabin goes

‘Notes for Fatty Cakes flickers through the landscape of demotic, rounding up the tribes of lenses language uses from plank to Planck: a mini-epic journey in the running heads below which letters, reportage and refrain record as I eyes an other.”Dost thou think, because thou art virtuous, there shall be no more cakes and ale?” Genre-kebabs on a skewer of wit.’
Tom Raworth
‘Ranging from ocean to dry-land pub, prairie to outer space, this book’s good-humoured restlessness
provokes us to think about relations between self and other. Andrew Spragg is a poet who can love; this book is in love with language without losing a grip on the world.’
Vahni Capildeo
Between Soundings is a creative partnership between Andy Spragg (poet) and Julie Groves (flautist). Through a combined interest in the arts they have worked to produce a series of new and exploratory performance pieces that reflect the links between musical expression and the spoken word. Concepts of folklore and narrative tradition become lines of enquiry, starting points for a spectral mapping out of creative space and practice. Works such as Echo & the Rush have served to call into focus the tension between experience and response by working an intimate self-mythology into being. At its heart, Between Soundings is a compelling demonstration of the possibilities shared creative practice has to offer.
One writer provided these three diverse and talented musicians with a poem. Working separately from one another, each of them utilised aspects of the writing to influence their own compositions. The finished products are fresh takes on the grand tradition of cross-discipline collaborations.